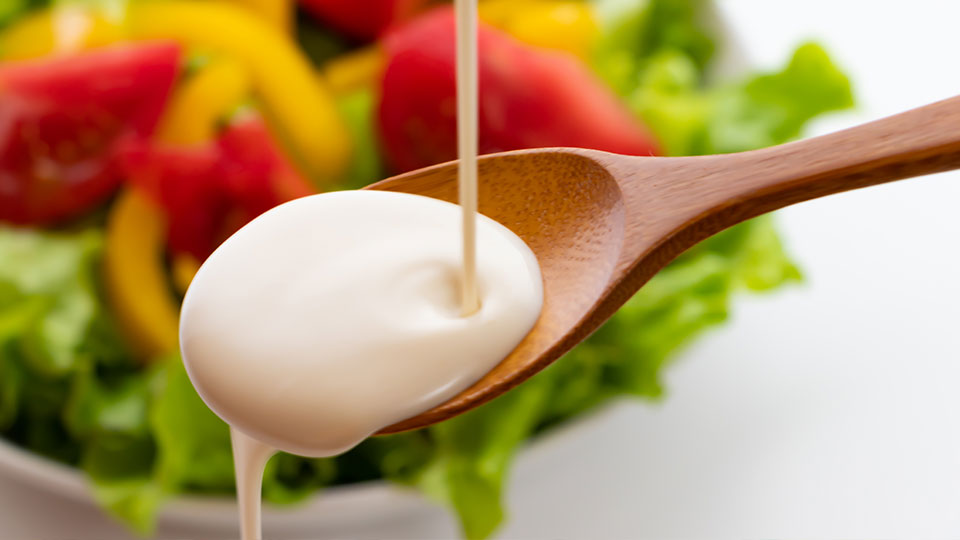 Creamy vinaigrette and other salad dressings tend to be popular because they can add a touch of indulgence to a salad, says Jessica Foust, RDN, vice president of culinary innovation and nutrition at food innovation consultancy Creative Food Solutions.

“People want high-quality, flavorful ingredients—leafy greens, roasted vegetables and fruits—and for all of the toppings to enhance the experience,” Foust says. “Creamy dressing adds that kick of flavor and creaminess that balances out the bitterness of the greens. It’s really what brings it all together.”

“People may not want to buy creamy jalapeno dressing, but they might be very interested in jalapeno ranch, for example,” Hill theorizes. Combining the comfort and familiarity of creamy, tangy ranch with the lesser known flavors of jalapeno could make the pepper more appealing to those who might otherwise be reluctant to try it, he adds.

As noted previously, consumers’ increased interest in salads and salad dressings likely stems at least partially from their increased prioritization of healthy eating. Indeed, 6 in 10 consumers surveyed by the International Food Information Council said it matters more to them now than it did a decade ago.

For many consumers, eating foods made with natural ingredients free of artificial chemicals and additives is either a preference or a necessity. “Consumers care about what they’re eating and definitely want to know what’s in their dressing,” says Jenny Van Dorf, director of marketing and communications for BRIANNAS Fine Salad Dressings. “Having simple, clean ingredients has been our platform since we started.”

Founded in 1982 as the Del Sol Food Co., the Brenham, Texas-based company produces 22 varieties of dressings, including a line of organic salad dressings. Commonly used ingredients include buttermilk and cheeses like Asiago and blue. A chart on its website even delineates product attributes, making it easy for consumers to identify which flavors are free of gluten, GMOs, high-fructose corn syrup and more.

T. Marzetti’s site and packaging, meanwhile, mention that its products are made with real Parmesan cheese, avocado and other authentic ingredients. The company’s Simply Dressed line was developed specifically as a clean label offering, produced with a limited number of recognizable, high-quality ingredients, Hill says.

Building on that premise, Hill continues, T. Marzetti’s Simply 60 dressings were formulated to be generally lower in fat, with fewer calories. The manufacturer uses part-skim milk in its Garlic Parmesan dressing, for example, delivering texture and flavor with fewer calories than the butterfat another dairy product might contribute. The Simply 60 name was specifically chosen to convey the line’s calorie and clean eating attributes to consumers who—like 43% of Americans—may be trying to follow a keto, reduced sugar or other diet or eating plan but may associate terms like low-fat with a product having little flavor.

“Instead of driving the message around low-fat or low-calorie, we very deliberately called out the caloric content,” Hill explains. “People generally understand that [something with zero calories] isn’t going to taste very good. But if it’s a reasonable amount—50, 60, 70 calories—they know you’re going to make a good product.”

Some manufacturers also have tried to meet the demand for healthy salad dressing options by incorporating yogurt or Greek yogurt, which can offer a rich consistency and other nutritional benefits, into products.

“Yogurt, in general, has this connotation of health—the probiotic benefits, the protein,” Foust says. “Even if the calories may be at parity with traditional [dairy options], or slightly less, people feel better about it. We’ve seen a lot of creamy dressings migrate to yogurt bases to attract those more health-conscious consumers who still want that creamy experience.”

Despite strong consumer demand, salad dressings (like many products, including cheese) were sometimes difficult to find in stores over the past year.

In response, BRIANNAS introduced online ordering capabilities in September 2020—a move Van Dorf says helped drive sales. “Shoppers were looking for things they could stock up on,” she explains. “Our dressings are shelf-stable products that could be in stores or a pantry for 10 to 12 months.”

What’s more, the variety of dressings available may differ by store. With online ordering, she adds, “consumers could ship directly to their door. It was an opportunity to try something different.”

A number of consumers were also interested in doing something different with BRIANNAS dressings. According to Van Dorf, the company has promoted its products’ versatility through online recipes and social media posts, and over the past year, many followers have responded by sharing their own inventive salad and other ideas.

“Because people are eating more meals at home, they’re looking at creative ways to add flavor without spending a lot more time in the kitchen,” she continues. “The most popular, growing flavor right now is an Asiago Caesar creamy dressing. People are using it not just as a salad topping, but also as a sandwich spread or in wraps. We’ve even seen people brush it on chicken after they’ve grilled it.”

Due to production constraints, retailers’ hesitation to accept category resets and other factors, the pandemic may have prevented many new items from hitting the market. However, Hill predicts new product introductions will begin this summer. (According to industry projections, the market is primed for growth. U.S. salad dressing sales, which have risen steadily since 2011, are estimated to reach $3.3 billion this year.)

With consumers’ growing appetite for new salad dressing flavors and applications, manufacturers should be thinking about how they can expand their offerings to ensure they’re providing enough variety for people who’d like to keep several dressings at home.

“You may have the standards—a Caesar, a ranch, an Italian—and then four or five more unique outliers,” Hill says. “That’s where some sort of fruit vinaigrette, or a ranch hybrid that has an interesting flavor profile, might come into play. The No. 1 use is salad, but they’re also using [salad dressing] as a marinade. One-bowl meals are also picking up steam again.”

Bottom line, he adds: “We want to have a portfolio of products that meet the flavor interests people have.”

Discover which specific healthy lifestyle elements consumers are looking for in the salad dressings and sauces they buy.